Who Runs The World? Girls. 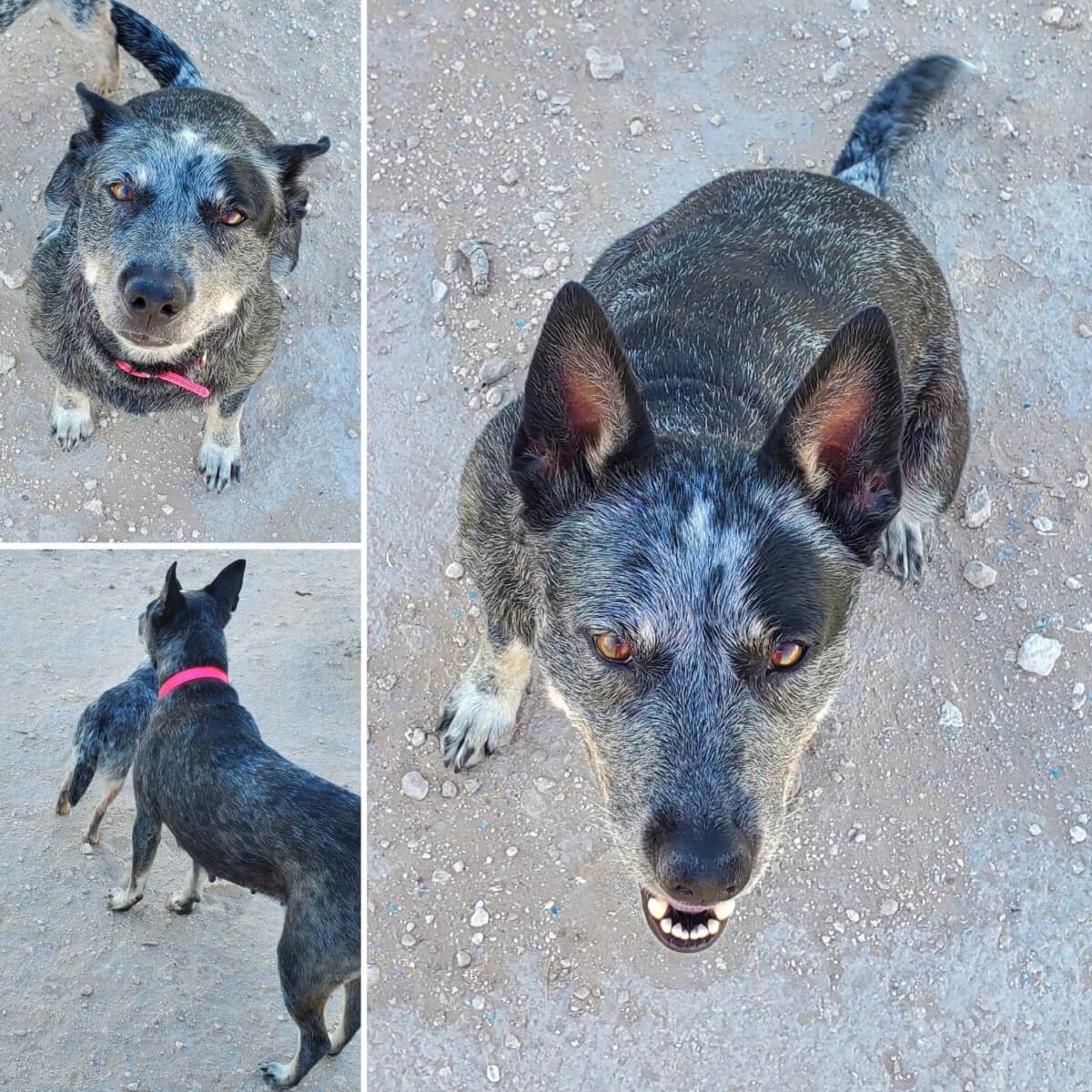 4E Queen Banderra, or “Bandi” is our original girl here. The Alpha dog of the pack. She was our first heeler we bought together, since my child hood Heelers. She came from working lines, as what we assumed would be standard size. She stands right between large mini and standard size, at 17” tall and is 40lbs. She is super smart and athletic. Fetch is her favorite thing in the world, aside from her main man in life, my husband, Zach. She stays on the road with him a lot now that she is spayed and retired from having puppies. She is very protective and is our guard dog of the place. She passes all of her good traits along to her pups as well. She was always the best mom, and even raised many pups that were not her own. To this day, she is always there to help me get each puppy cleaned up and breathing, if momma gets overwhelmed in birthing the litter. 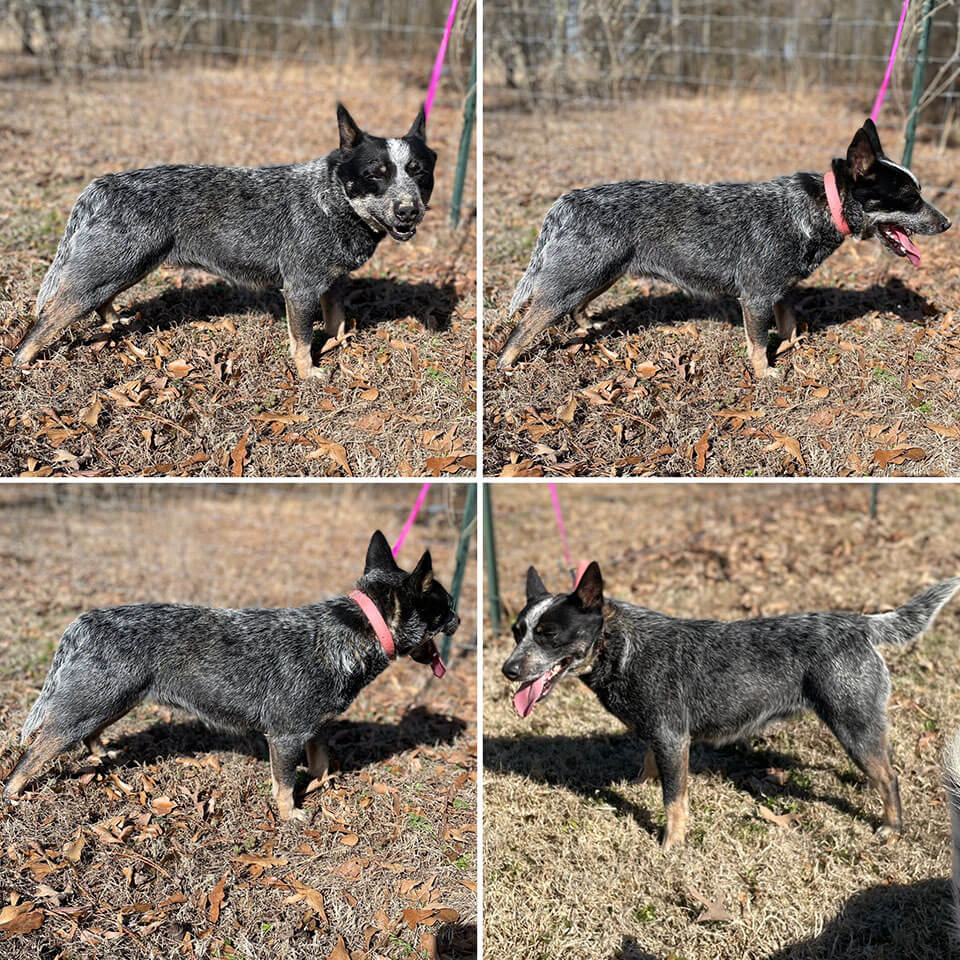 4E Banderra’s Sasha, or “Sasha”, is Bandi’s oldest pup we kept from her second litter. She is sired by 4E Kawliga. She is the perfect example of a mini heeler to me. She is athletic, smart, and small. She has an official show height of 15” tall and 20-25lbs. She throws gorgeous, masked, stocky, tiny pups, and like her mom, is always the best momma to her litter. 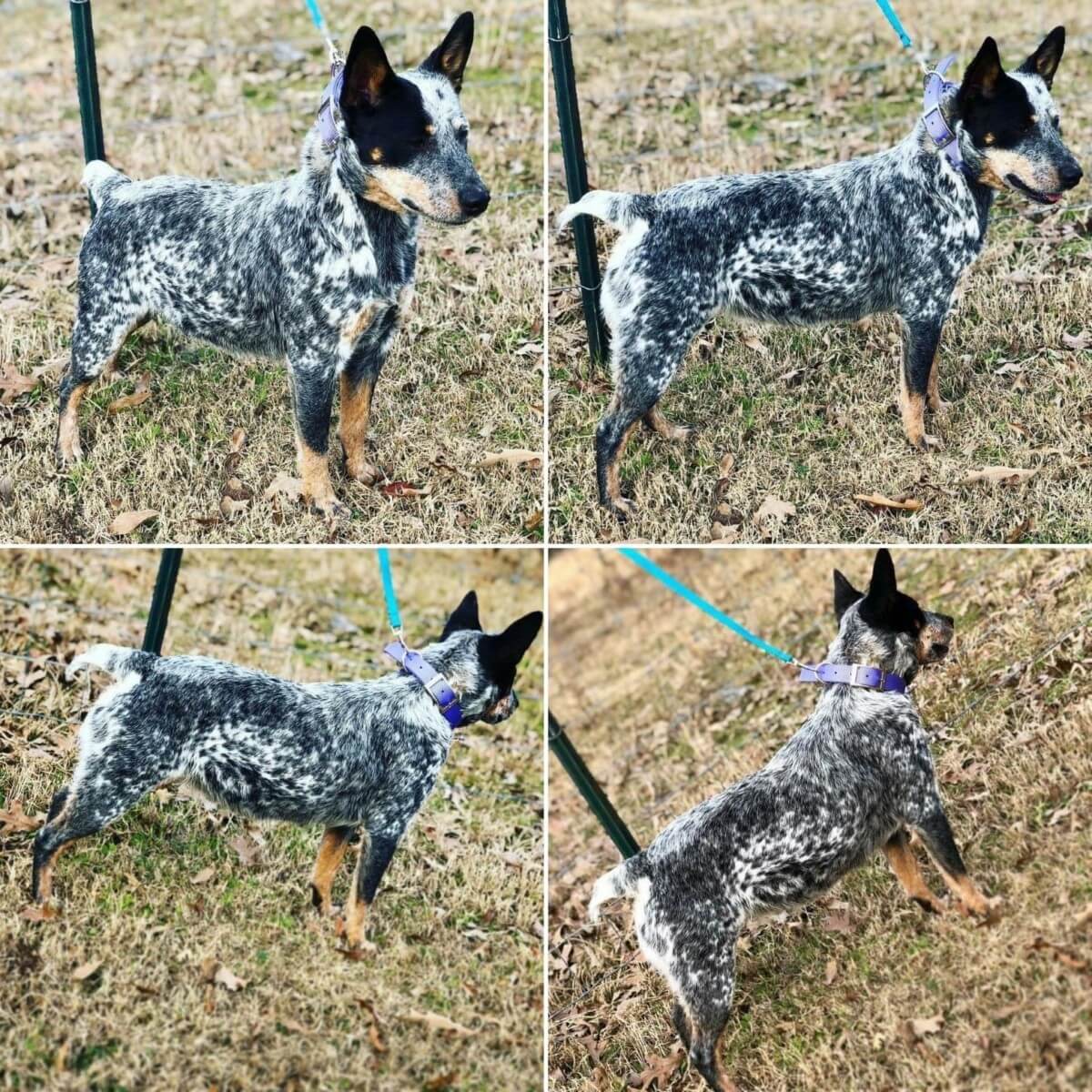 4E Peanut Butter and Jelly, or “Peanut,” is one of our oldest girls here. She’s one of the best built dogs on the place, and throws beautiful masked, mottled babies. She has an official show height of 15 3/4” tall and 28lbs.

Out of her 2020 litter she had “Pistol” who my little girl kept, and has had a very successful show carrier starting out. She won best of breed puppy in one of the triple crown ASDR shows as a 4 month old puppy. 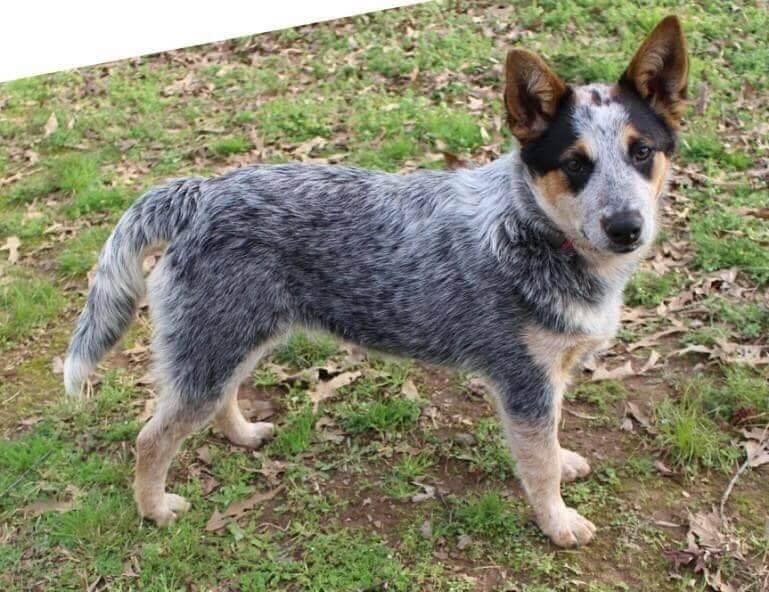 JMS Tara O’Hara, or “Tara” is a super stunning girl who came from JMS Mini Heelers as a young adult. She had one gorgeous litter for them before coming here. She is wonderfully built. Her mom is a red AKC girl and dad is a mini blue. She is completely genetic clear of all diseases. She is 16” tall. 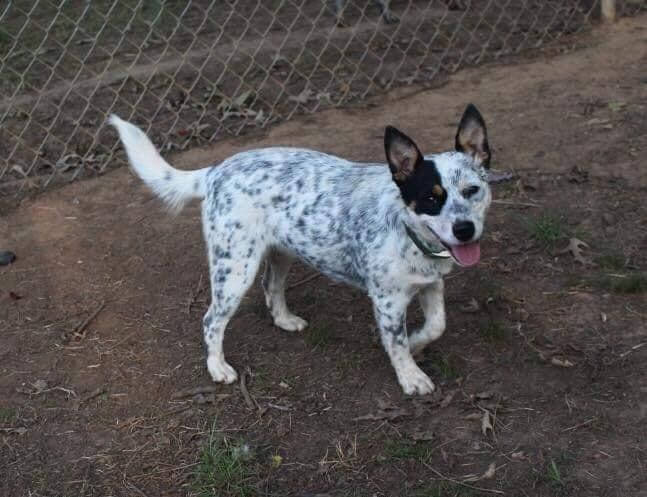 JMS Bonnie Blue, or “Bonnie”, came to us recently as an older girl. She has had some gorgeous litters for JMS mini heelers, and we are hoping to see some out of her and 4E Kawliga in spring 2021. She carries the chocolate gene, so we are crossing our fingers for tiny mini chocolates out of them. Her mom is a small AKC girl, and her sire is a mini. She is 13.5” tall and is the sweetest girl ever. She loves to give kisses, and follow the kids around the yard. 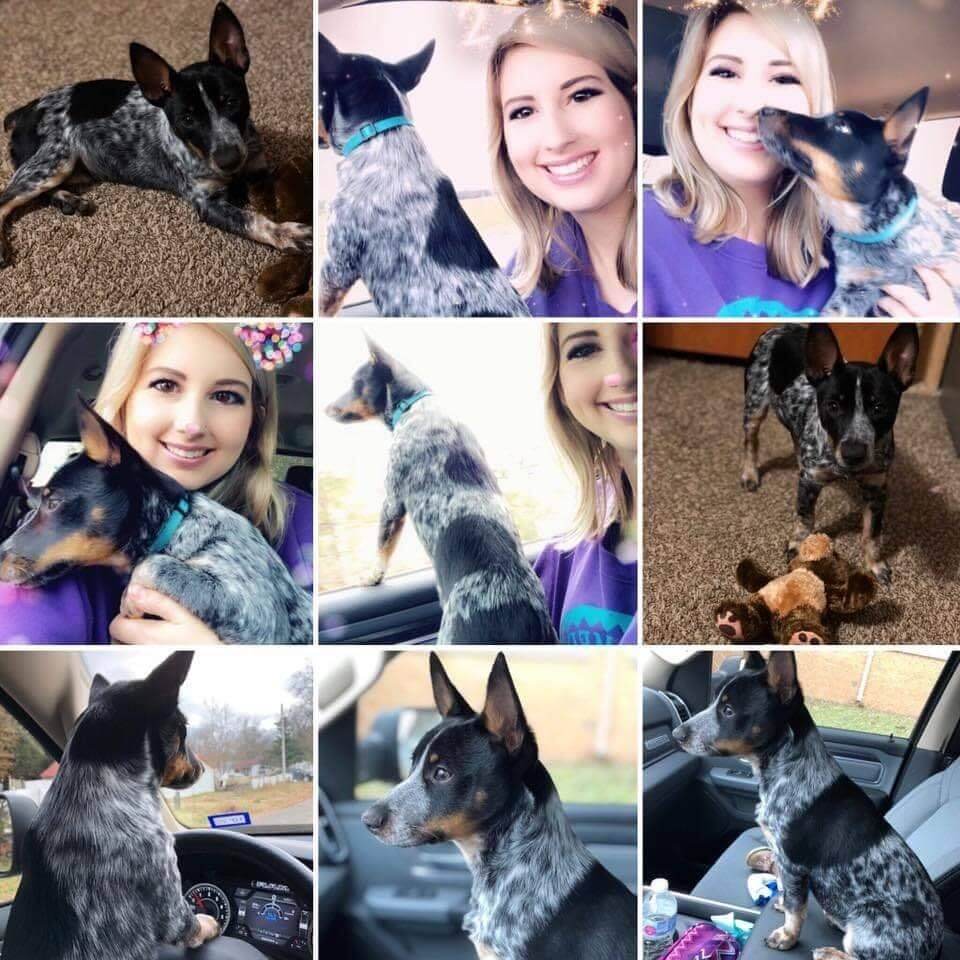 JMS Raeya Sunshine, or “Raeya”. Oh my girl Raeya.. where do I begin? Raeya was my very first true mini heeler. She’s the sweetest tiny girl and is my baby. She has an official show height of 13” tall and is 15lbs. She is spayed now, due to complications and needing to have an emergency c-section with both of her litters of puppies. Her pup from her last litter, Ember, is a pretty little red girl that will be bred in spring. 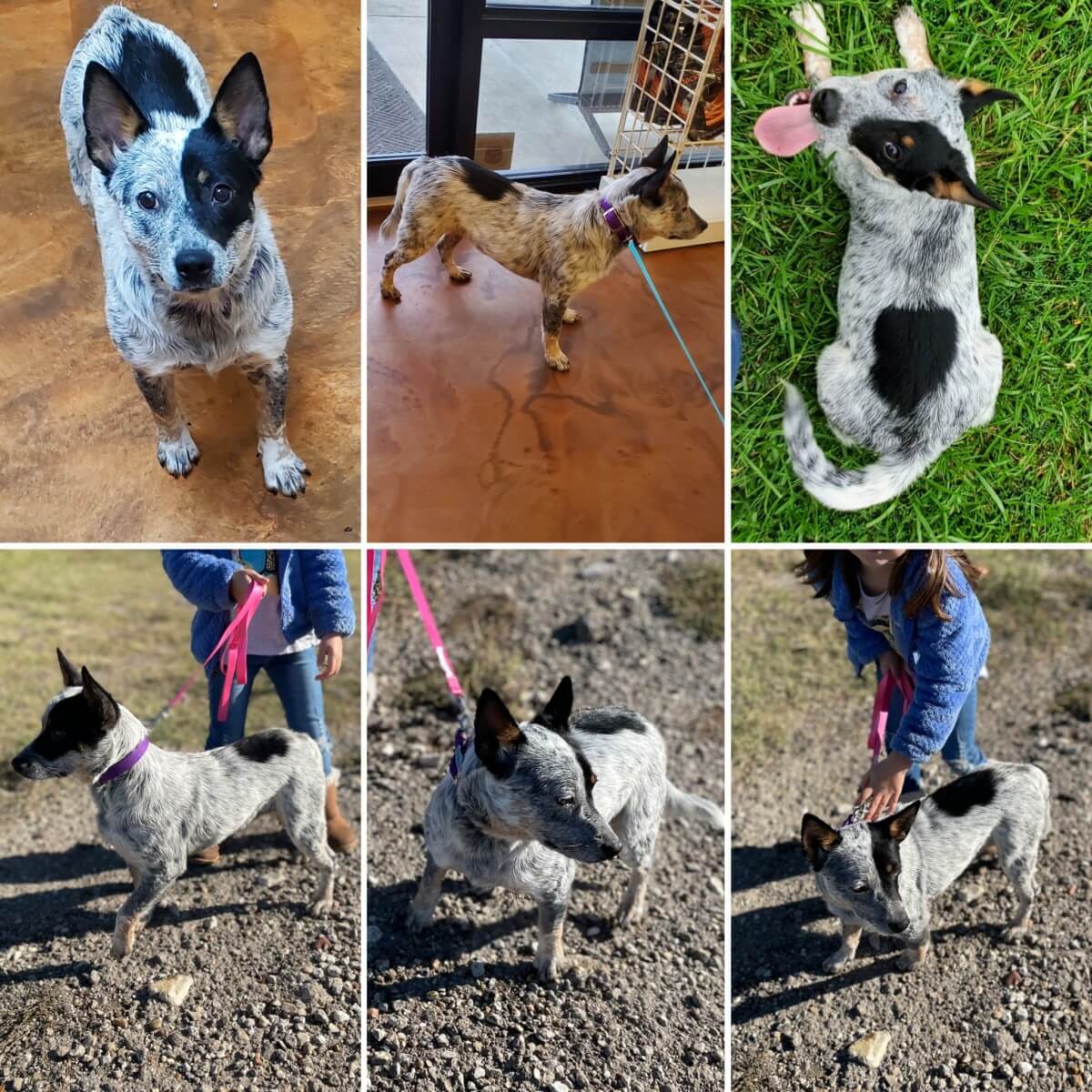 4E Sasha’s SuperNova, or “Nova” is our super thick and stocky girl out of Sasha and Ranch. She is predominantly white, or heavily mottled, like Ranch. Her grandparents are Bandi and Kawliga. She is 13” tall and 18lbs. She will be bred to Cactus in spring of 2022. 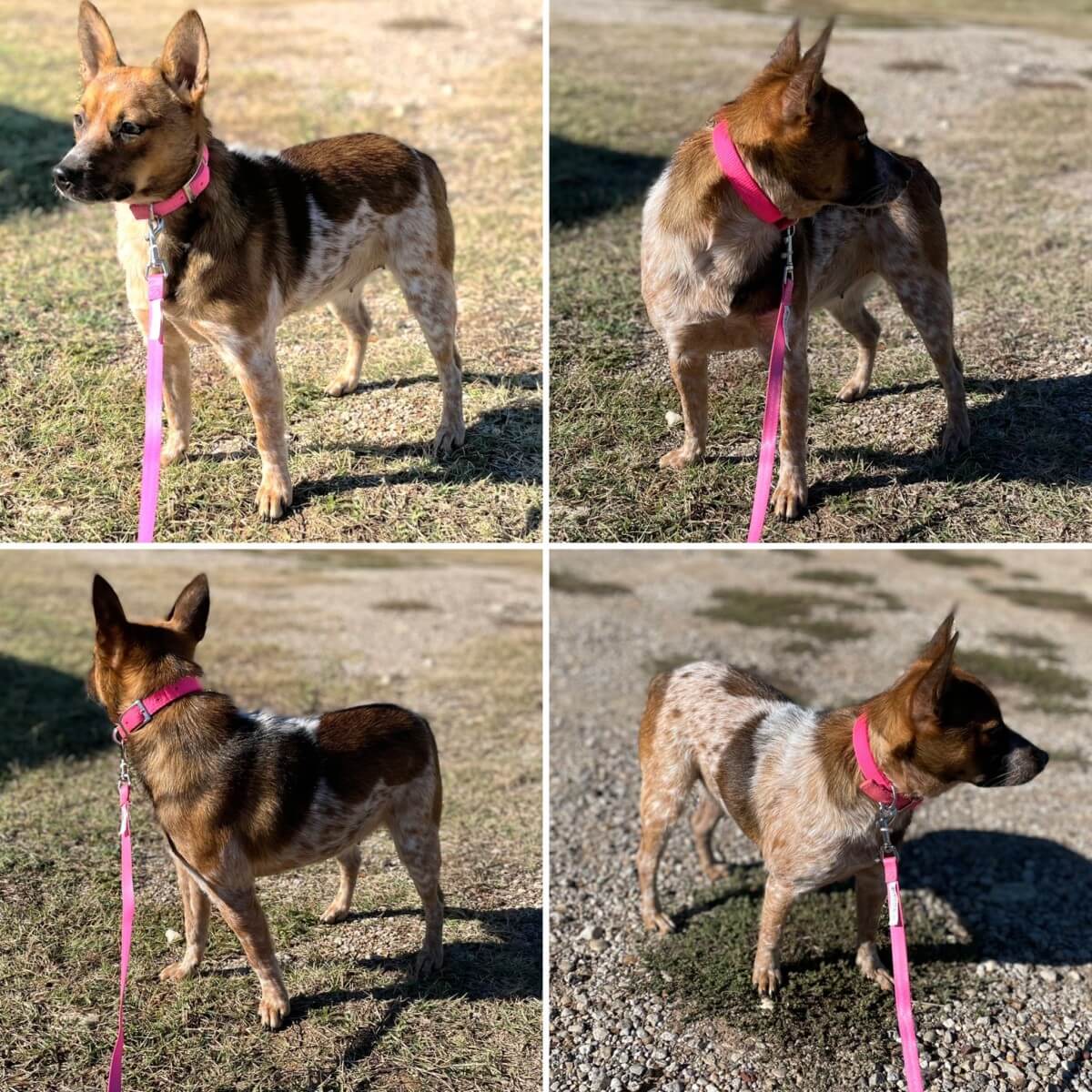 4E Raeya’s Ember, or “Ember”, is a sweet red girl that I raised out of Raeya and Truffles. She was the biggest of the litter of 3 survivors after Rae’s emergency csection. Mom developed an infection and had to stay at the vet for a few days when the litter was a little over a week old, so they had to be weaned and bottle fed. She grew out to be a 14” tall and 15lb girl just like her mom. She will be bred back to Turbo in spring 2022 for their repeat litter. 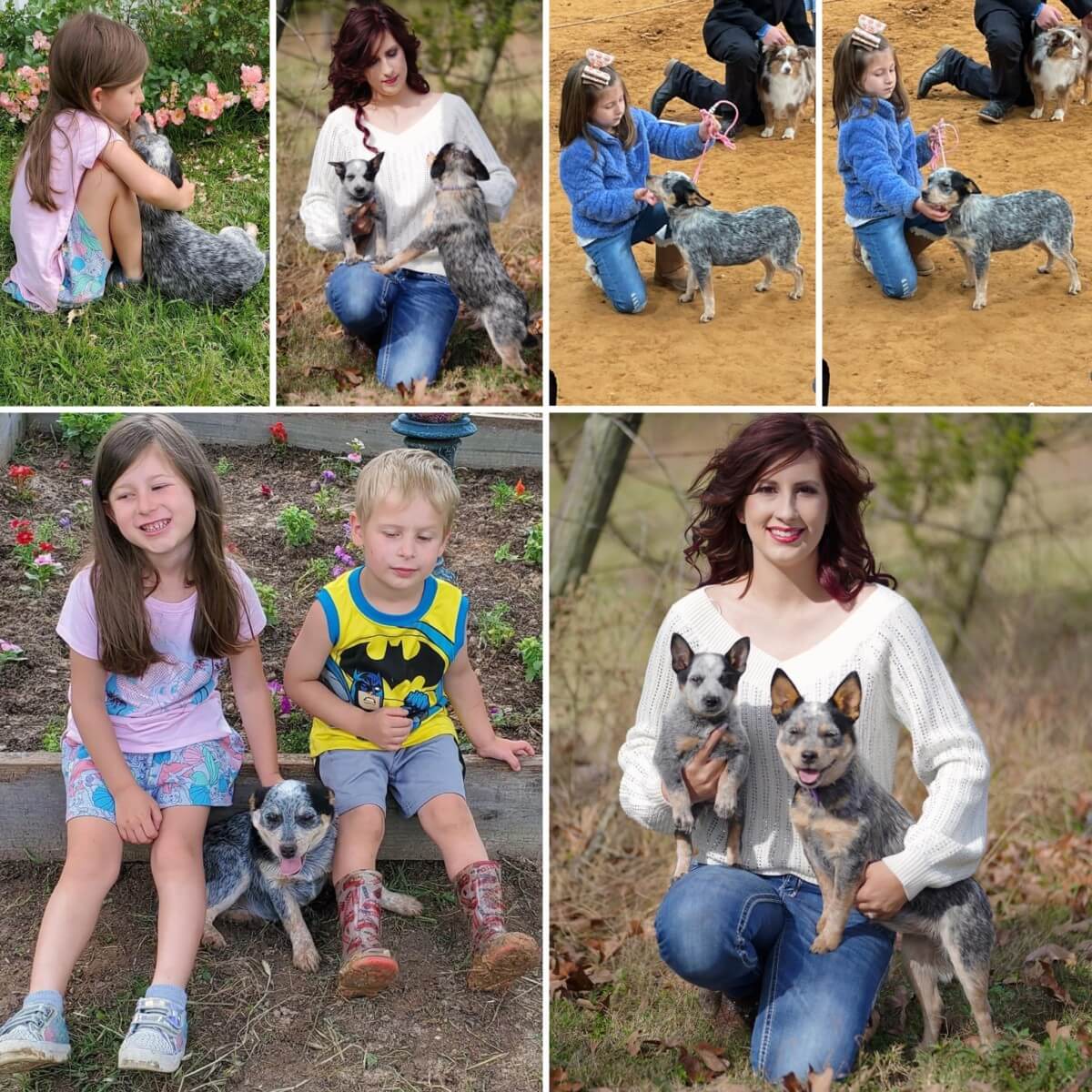 JMS Rhinestone Diva, or “Diva”, is the tiniest girl on the place. She has an official show height of 11.5” tall and 12lbs. She is very well built, and scores well in the conformation shows. She is the little firecracker, and loves to catch moles and gophers, and to chase her favorite squirrel every morning. After her emergency c-section in October of 2021, I am giving her a heat cycle off to recover fully, and she will have her second litter in fall of 2022. 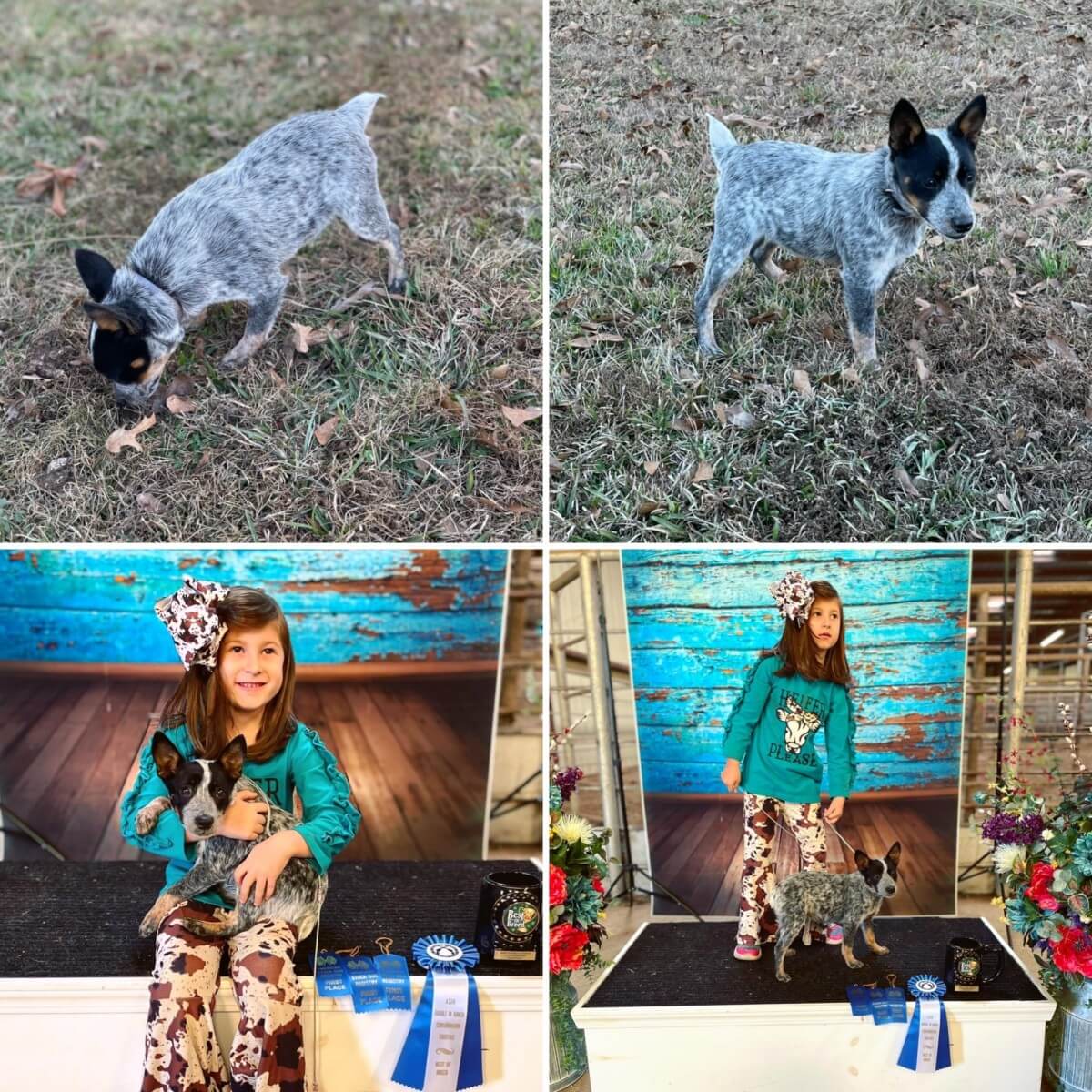 “Pistol”… oh there isn't enough to type about her. We suddenly and tragically lost Pistol on 2/8/2022. Pistol was Baylen, our 7 year olds, absolutely best friend and partner in crime. She is devastated and heartbroken over her loss. They have done everything together in Pistols almost 2 years of life. Pistols name fit her perfectly. She was a spitfire of energy and grit. She would take on anything from a person getting too close to Baylen, to a 2000 lb bull, and not even hesitate. Baylen and Pistol won tons of awards and big wins in the dog show ring. She had numerous Best Female and Best of Breed wins as a puppy and adult. Shortly before she passed, she titled out and received the highest title of Elite Grand Champion. As a puppy, Baylen and Pistol were awarded #3 Miniature Australian Cattle Dog in 12 and under for 2020 end of the year points. A week after her passing, at the year end awards banquet, Baylen received her end of the year prize. They were #1 top dog for Mini ACDs in 12 and under for 2021.

One of the greatest blessings for us, is that Pistol had her first litter of babies in December of 2021. Of that litter we kept a little full-masked male, who is clear of all genetic diseases. Who we named 4E Pistol’s High Powered Bullet, or “Bullet”. He reminds us all so much of his incredible momma. And we are so thankful to have him here with us. 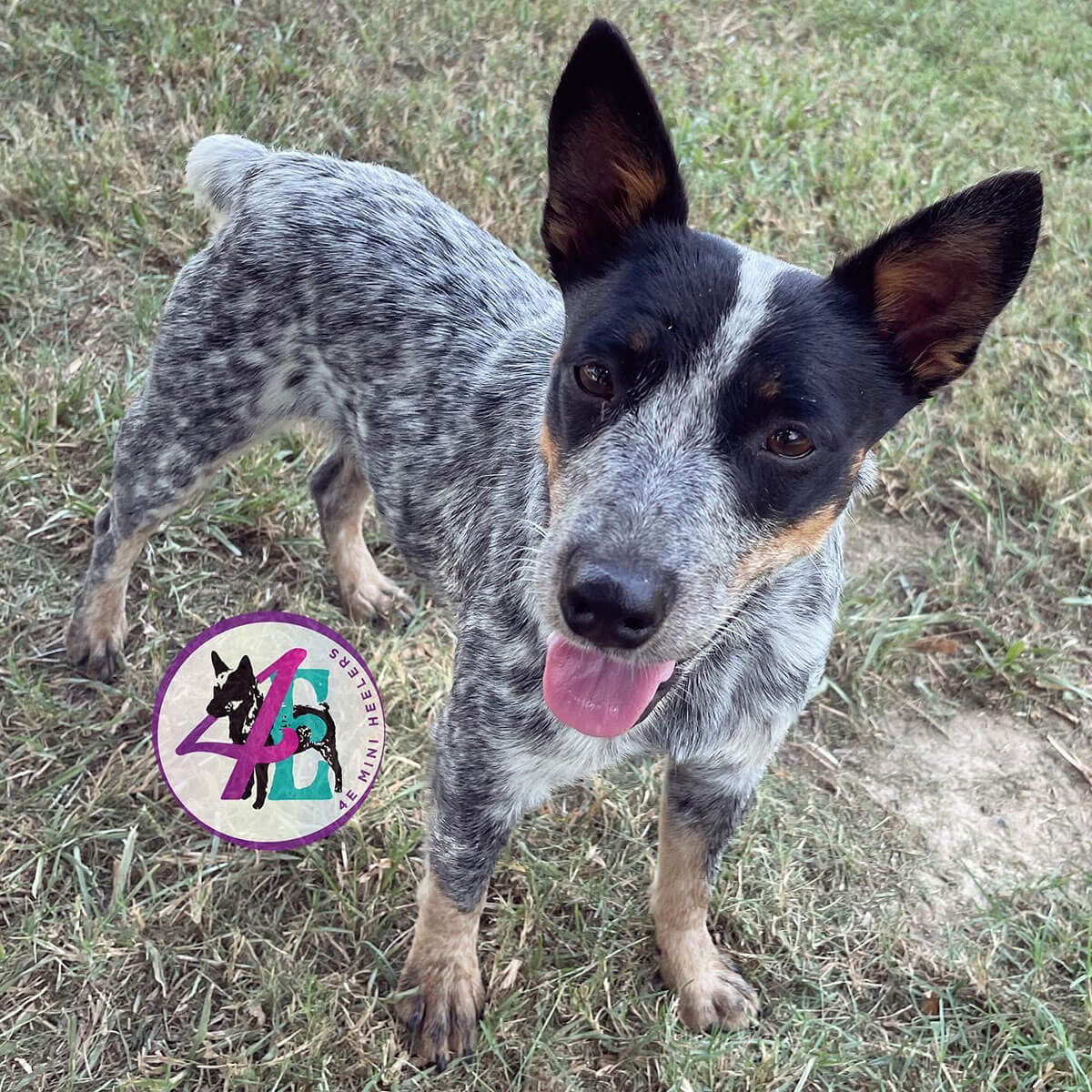 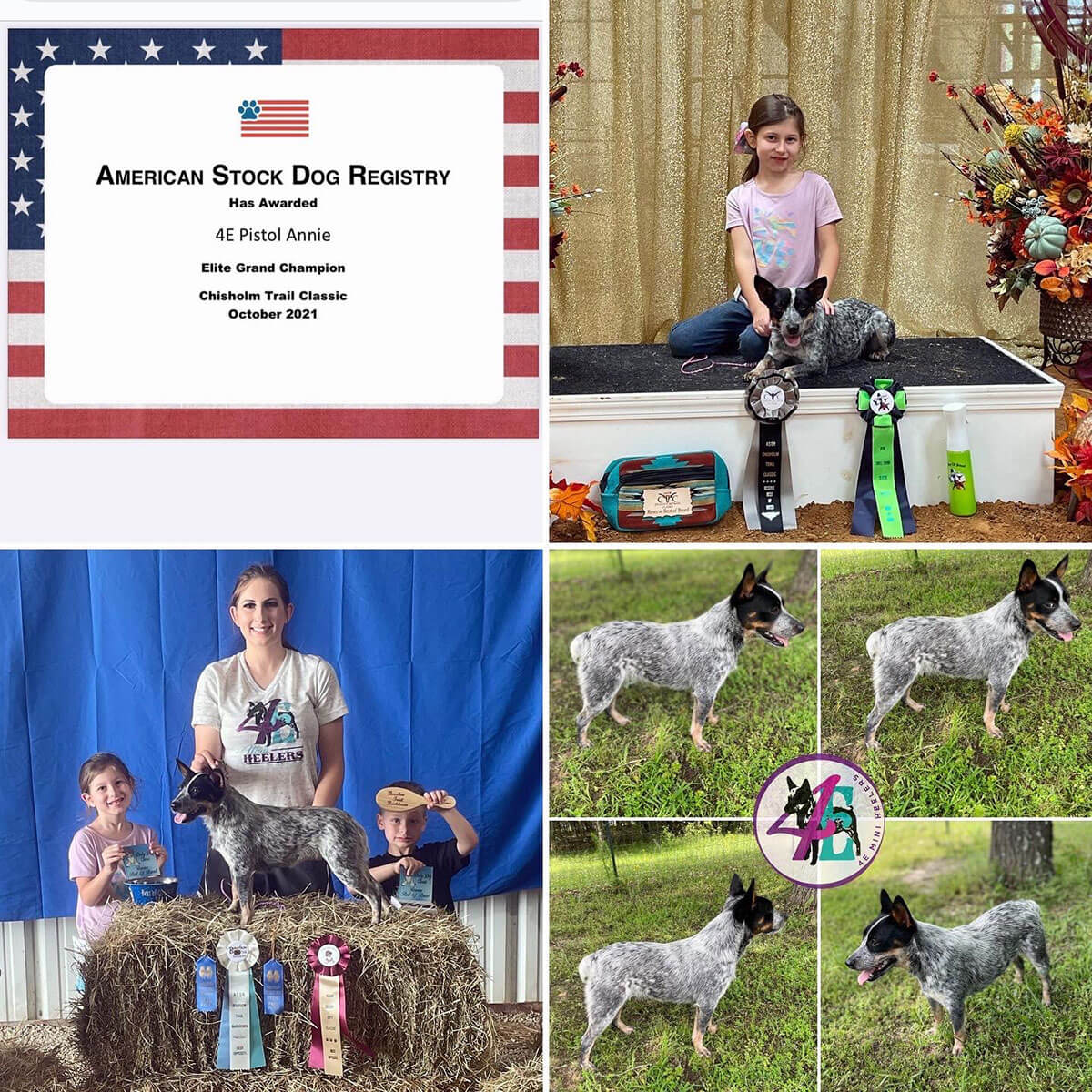 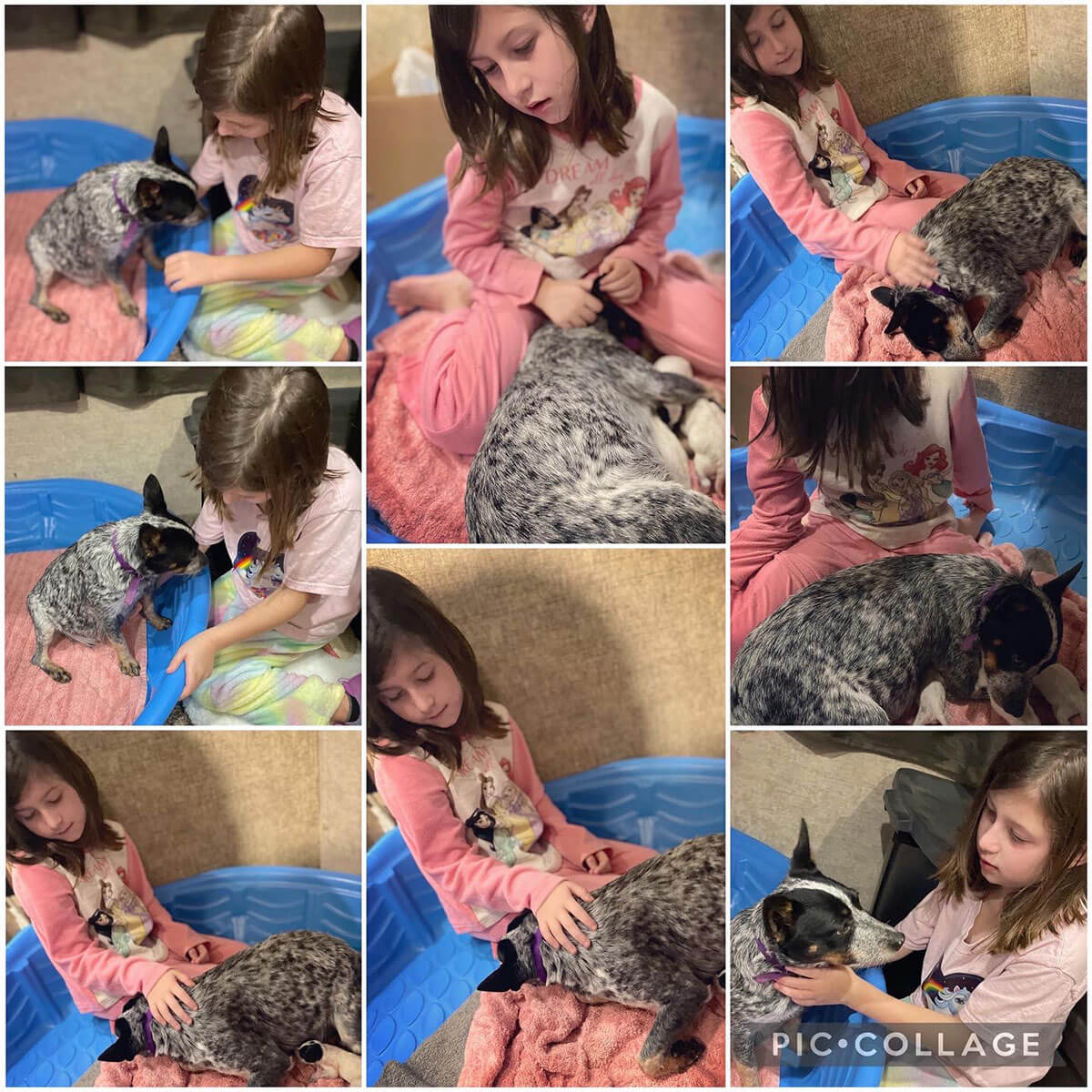 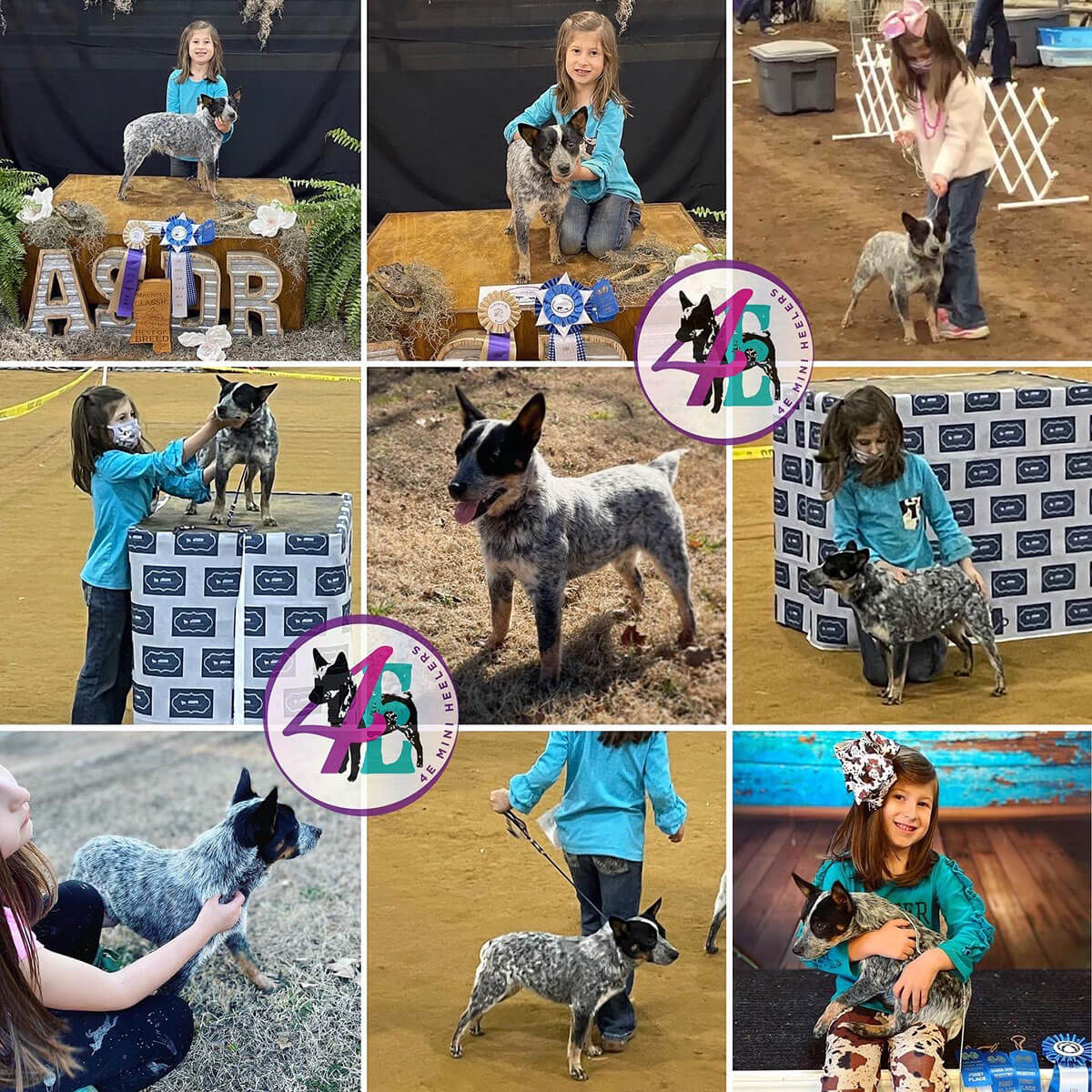 Thank you for visiting

We would love to hear from you!

If you are just wanting to day dream over the puppy cuteness, make sure to check back in frequently, as we add photos of our adorable litters of babies as they are born, and update photos of them as they grow up until they leave for their new homes!
Contact Us! 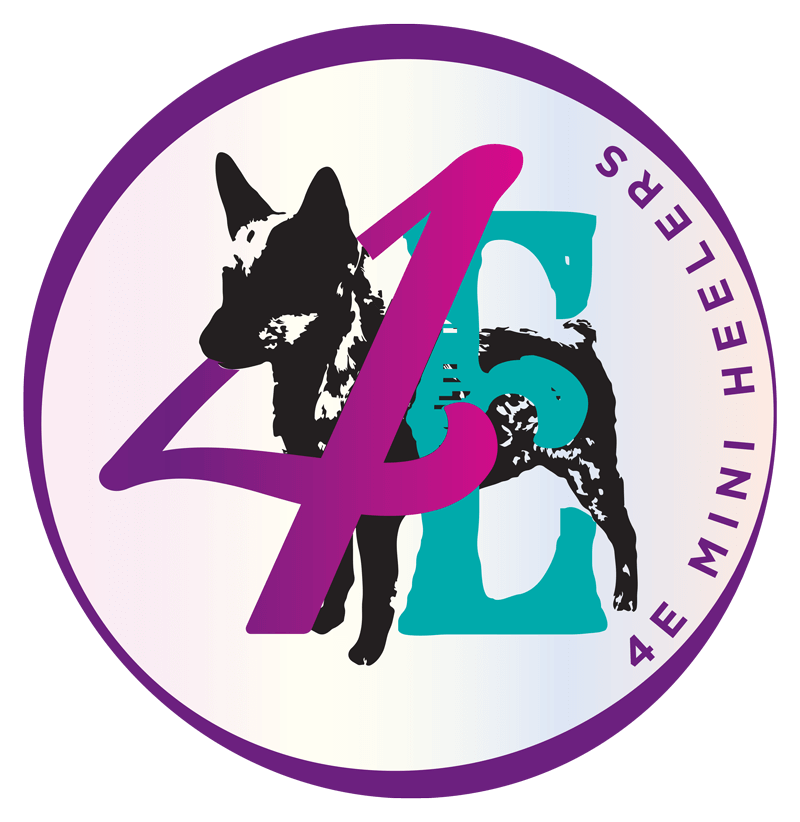